Place Du Casino
98000 Monaco
Partager avec FACEBOOK Partager avec TWITTER
2885 intérêts
Thu 24 May – Sun 27 May 2018
Practice 1Thu10:00 – 11:30Practice 2Thu14:00 – 15:30Practice 3Sat11:00 – 12:00QualifyingSat14:00 – 15:00RaceSun14:00 – 16:00
Formula One Grand Prix Monaco since 1929, it is widely considered to be one of the most important and prestigious automobile races in the world and, with the Indianapolis 500 and the 24 Hours of Le Mans, forms the Triple Crown of Motorsport. The circuit has been called "an exceptional location of glamour and prestige". The race is held on a narrow course laid out in the streets of Monaco, with many elevation changes and tight corners as well as a tunnel, making it one of the most demanding tracks in Formula One. In spite of the relatively low average speeds, it is a dangerous place to race and often involves the intervention of a safety car. It is the only Grand Prix that does not adhere to the FIA's mandated 305-kilometre (190-mile) minimum race distance. The event was part of the pre-Second World War European Championship and was included in the first World Championship of Drivers in 1950. It was designated the European Grand Prix two times, 1955 and 1963, when this title was an honorary designation given each year to one Grand Prix race in Europe. Graham Hill was known as "Mr. Monaco" due to his five Monaco wins in the 1960s. Brazil's Ayrton Senna won the race more times than any other driver, with six victories, winning five races consecutively between 1989 and 1993. Fernando Alonso is the only driver to have won the race in consecutive years for different constructors, winning for Renault in 2006 and McLaren in 2007. The Circuit de Monaco consists of the city streets of Monte Carlo and La Condamine, which includes the famous harbour. It is unique in having been held on the same circuit every time it has been run over such a long period – only the Italian Grand Prix, which has been held at Autodromo Nazionale Monza during every Formula One regulated year except 1980, has a similarly lengthy and close relationship with a single circuit. The race circuit has many elevation changes, tight corners, and a narrow course that makes it one of the most demanding tracks in Formula One racing. As of 2015, two drivers have crashed and ended up in the harbour, the most famous being Alberto Ascari in 1955. 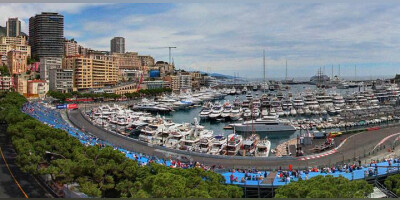 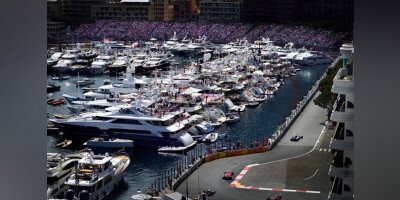